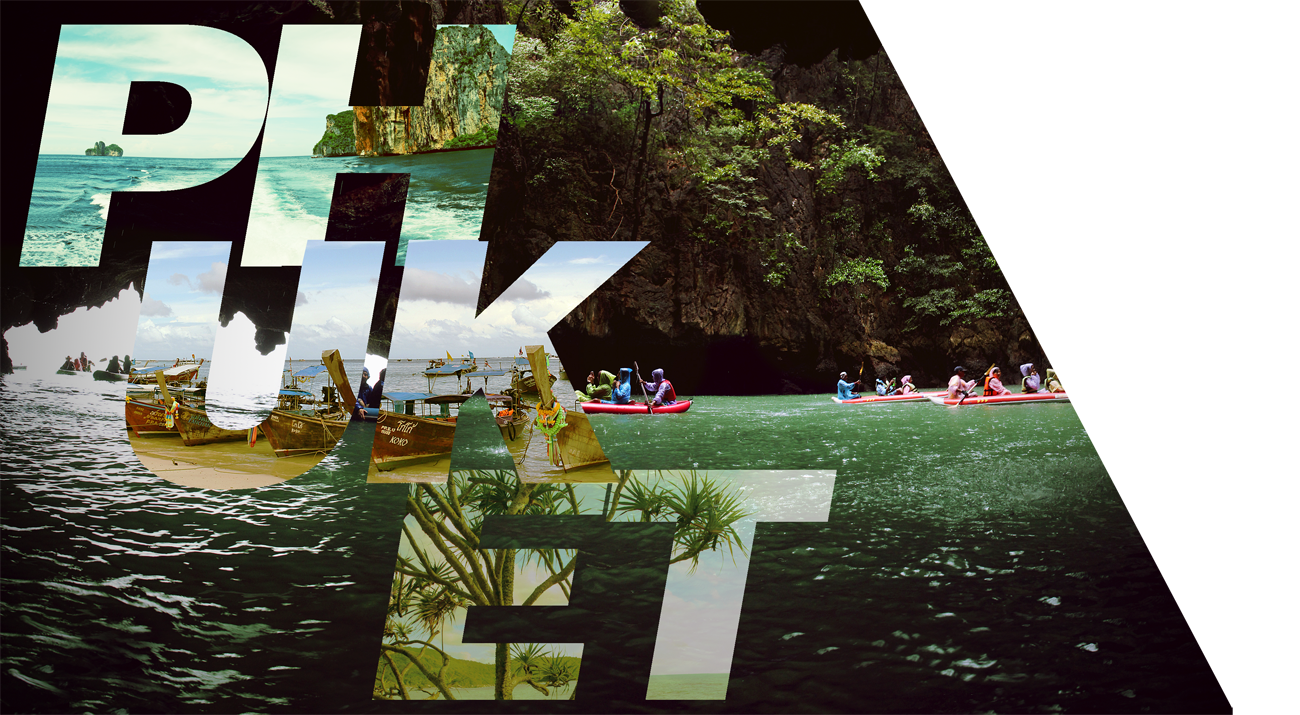 Phuket’s charm, despite its obvious beauty and modest nature, is a little hard to take in unguardedly.

Perhaps it’s the unavoidable past that will loom every time you immerse in its lush greens and sharp breaks: the islands around Phuket, Phang Nga and Krabi were bestowed an unfortunate conflict of being one of the more recently famous catastrophe-stricken paradises when a tsunami hit most parts after an earthquake happened in 2004. It has recently been highlighted after the release of the film The Impossible in 2014, which detailed much of the tortures both foreigners and locals alike had to endure—a nightmare that, while it may be more of a once in a lifetime event, may come up to be a rather unavoidable persistent notion. Like street robberies or maybe accidents you imagine that there are things you are hopeful you can survive when traveling, and you know a tsunami is not one of them.

It was one of the nagging thoughts C and I were plagued with the moment we started seeing the waters around Patong Beach, one of the beaches you will encounter on the van ride from the airport; the place which also housed most of the controversial bars enough to power the evenings of all of Phuket. We picked Kata Noi, about 15-20 minutes away from the more tourist-popular Patong, as we both agreed that the trip was meant for unwinding and tried to go for the serene–only to realize that our hotel was situated in an area that required uphill walking; although relatively beach-front and about 7 minutes of walk to the beach. That means seeing the vast ocean from a hill, and from our point of view, seeing all the small areas, houses and restaurants below and letting our imagination get the best of us. 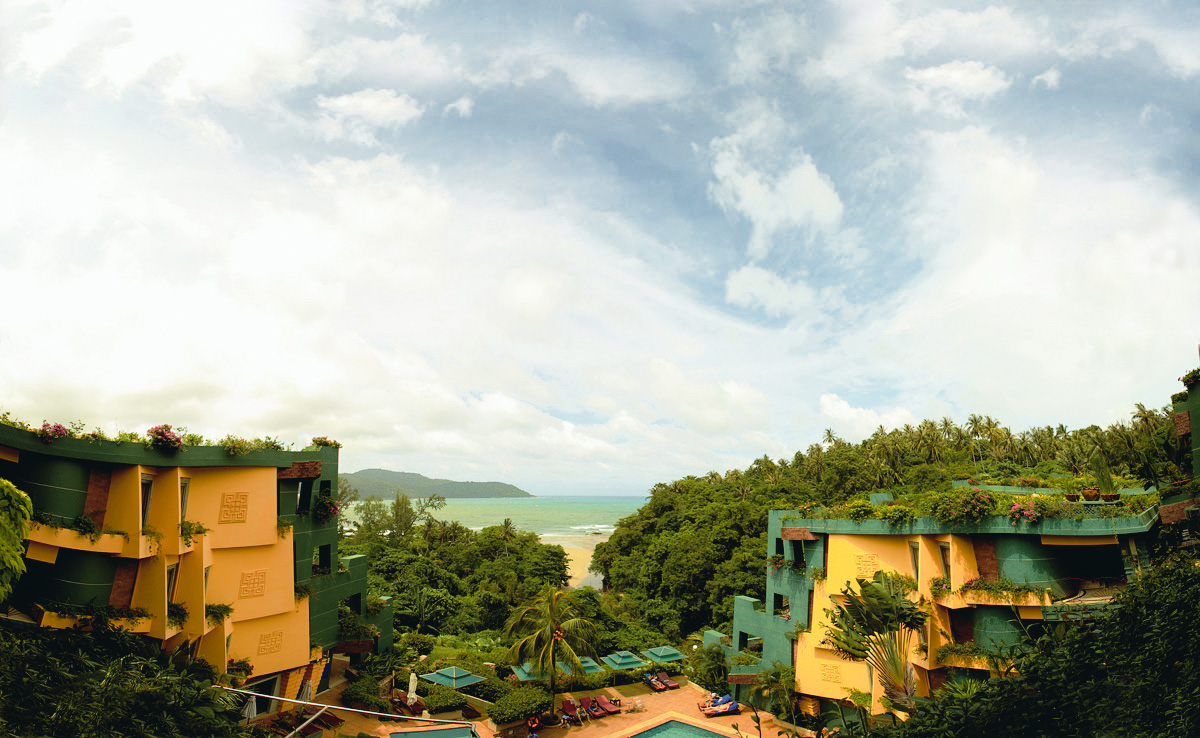 Phuket’s first hour has you catching yourself holding your breath and you partly thinking: this is beautiful, but I wonder how it was like.

When we had Phuket in mind, we were more excited for all the beach lounging or discoveries in store than taking in more alcohol than we can hold and checking to see if the views can really match our imagination over at Bangla St–some parts of Thailand have gotten the reputation of being party circuits due to the cheap beers and the enthusiastic entertainers with a rather mature approach–usually a toss between Muay Thai or exotic dancing. Although I was too young to experience these things when I first went to Thailand 20 years ago, I was pleased to find however that some of the things I were expecting never changed: the same reverence for Buddha that I was very fascinated with when I was young, seeing all the houses with small temples in front of their yards; the dependency of people on their motor bikes (and their dangerous passion for speeding and sometimes without helmet, I might add, although they seem to be enforcing stricter laws about safety now); and of course, the warmth that Thai people are known for. 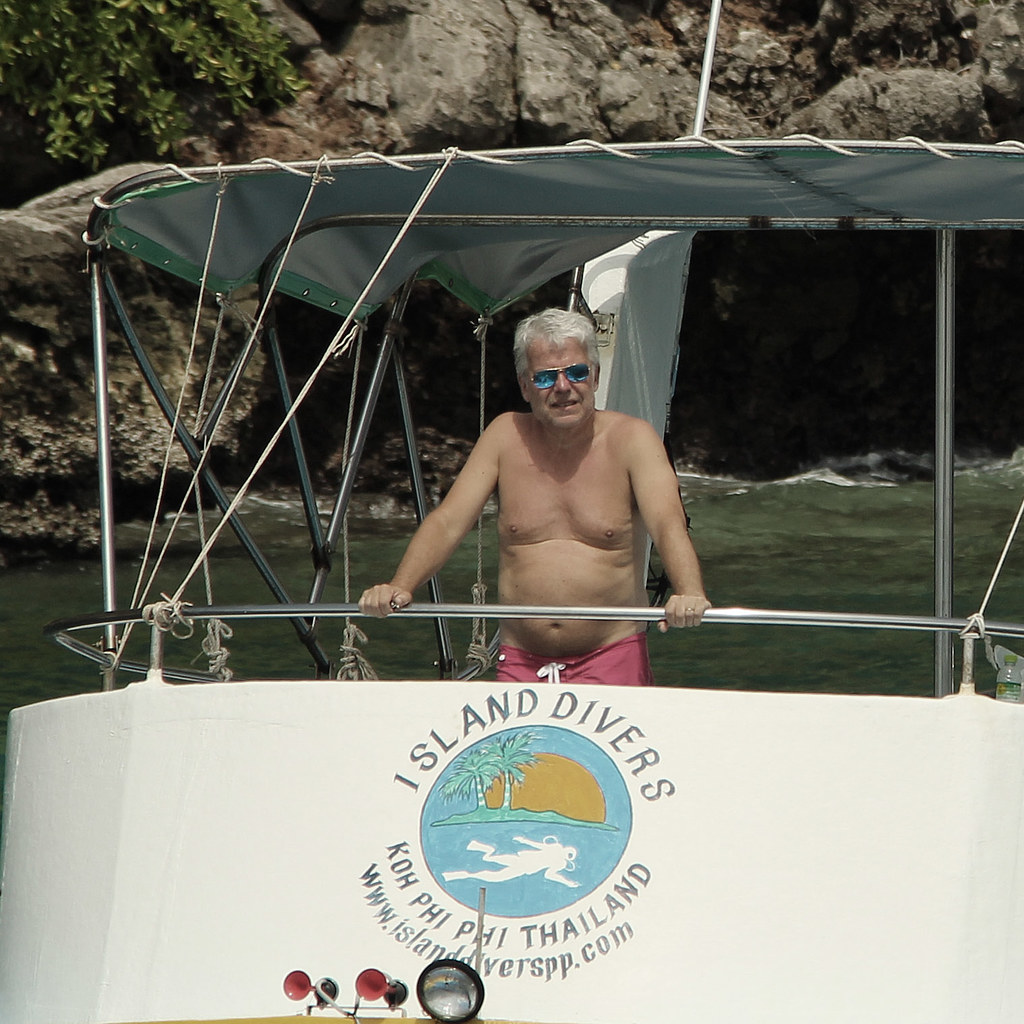 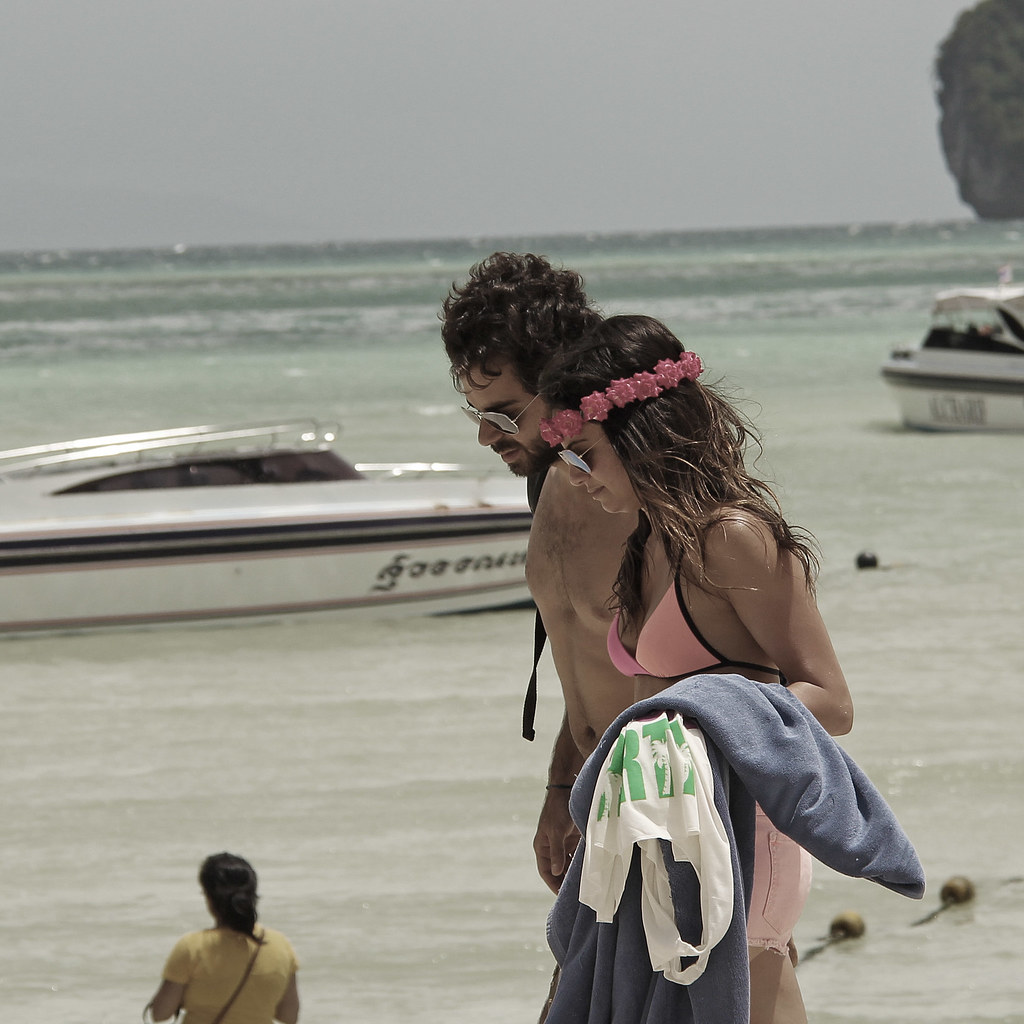 Part of the concern of coming from the same South-East Asian cluster is perhaps, seeing the same things over and over again albeit in a different language and different food: same third world struggle, same islands and beaches, same humid weather. It can be hard to find a new angle to something you’re accustomed to seeing. However, if there’s anything I probably look forward to or cannot have enough of in all these trips, would be finding a kindred in exhibiting the same warm hospitality. Going around the islands–be it grabbing dinner or going for cheap beers, or perhaps even just renting a body board over at the Kata Noi beaches–felt like home in a strange language. You have people with easy smiles and helpful dispositions and positive inclination in making your trip memorable.

“You from Philippines?” My surfboard rental guy’s friend asks me, after realizing I don’t sound local. I nod my head and smile. He puts out his chest and boasts, “Me too!”

“No way!” I exclaim. Thailand is no stranger to Filipinos, my father even treating it as his second home decades ago.

He laughs at my gullibility, and then pounds his chest. “Myanmar.” I share the chuckle with him and the surfboard rental guy. My leg has been willingly pulled. 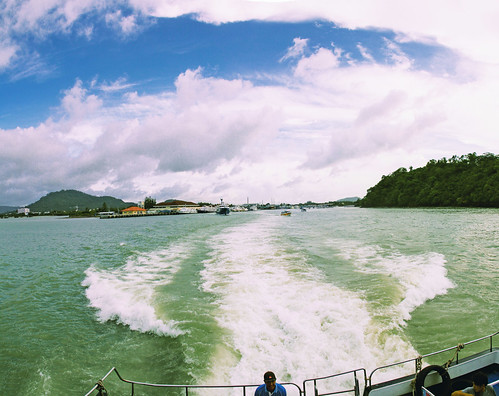 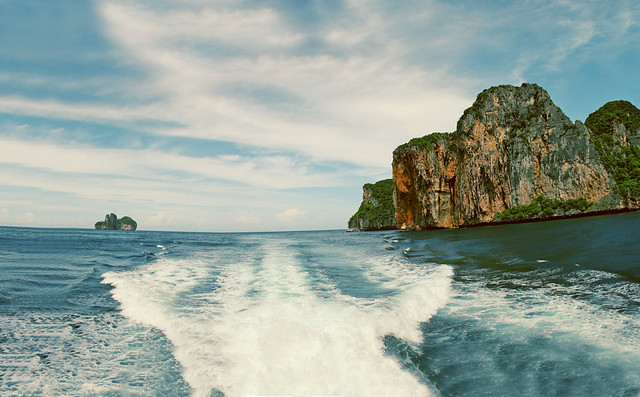 The way tourism works in Phuket is a lot like Boracay but with the charm of Palawan–that means the views look more like scattered islands with freshwater and lush green mountains with small beaches in between just like Palawan, but has the aggressive commercialism of Boracay.

The areas are broken into smaller provinces and clusters, each providing a different view and a different offering. Koh Phi Phi, for example, is nestled within the eastern part of Phuket and is part of the Krabi provinces, and offers a wider stretch of hotels, restaurants and bars within the island, hence serving as a destination for those who are exploring other nearby islands. Reaching Phi Phi Islands is about 4 hours from Phuket by larger cruise ships or by speed boats, so it’s the perfect pit stop. 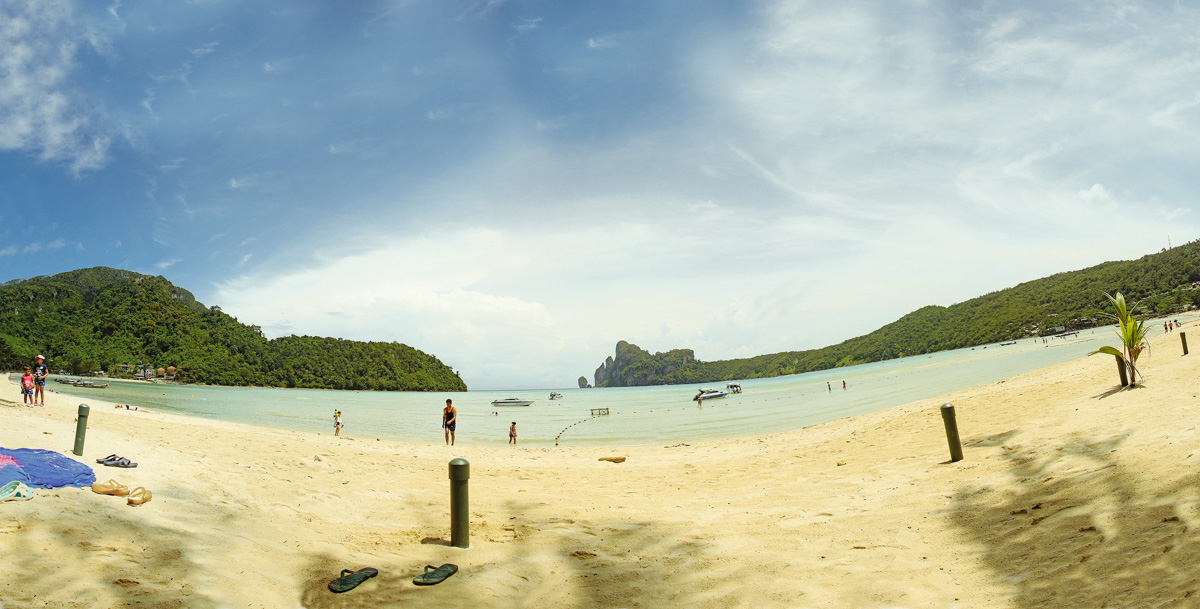 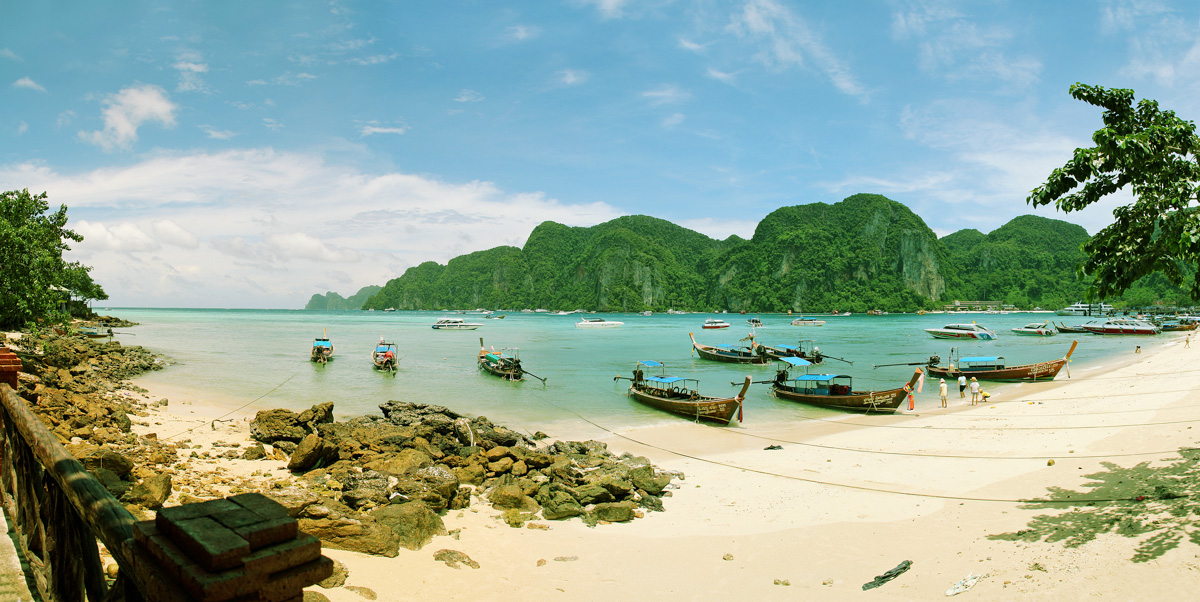 Phang Nga Province, however, boasts of more quiet islands and hidden wonders–although also home to Khao Phing Kan, a limestone rock in the islands used in the James Bond film The Man with the Golden Gun back in 1974. The area has become so popular to tourists that the locals have erected small shop houses within the island selling various trinkets, magnets, and even waterproof pouches and SD cards. Some of the islands around Phang Nga have a different story, however: the bay have various sights some accessible only by underground caves, leading to a closer look at serene waters inside the islands. 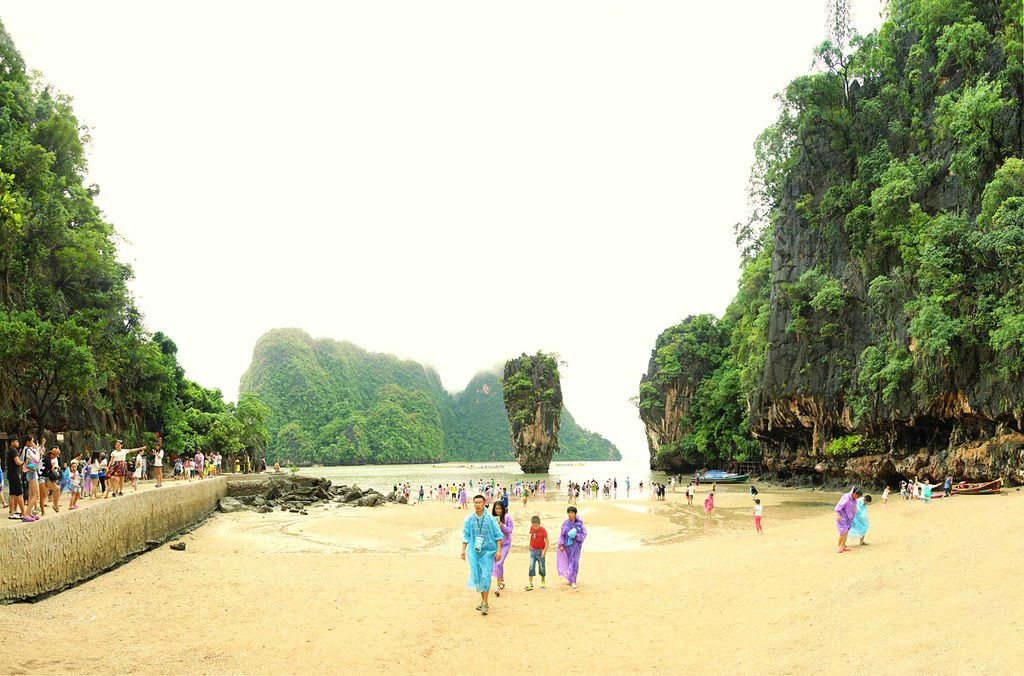 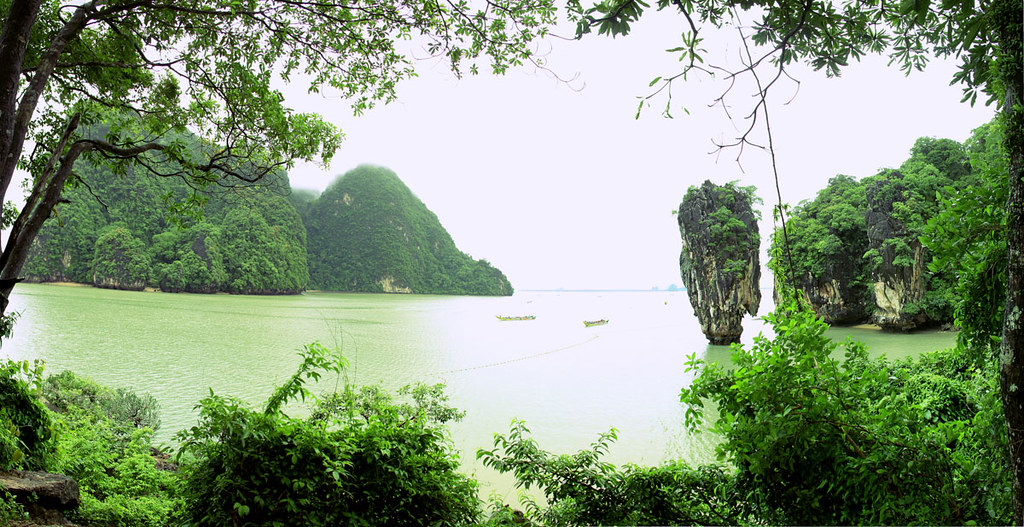 Our tour took us to these sights by a smaller cruiser boat, stopping near the mouths of the caves and unloading a dozen or so inflatable kayaks, bringing the wide-eyed tourists around with boat guides. It was raining around Thailand then, and Muku, our guide who will proceed to accompany us for the three or so times we would venture out into the waters, is well equipped to battle the rain with a makeshift plastic bag on top of his head, while we wore plastic raincoats as both C and I are more susceptible to catching colds. He tells us of how the caves we’re passing through are not accessible when the tide is high, and that those underground caves are the only entrance to the area.

“What happens if it closes out and we’re here?”

He grins playfully. “We stay overnight.”

The cave opens us to bright lights and sleepy greens; the rain has turned into drizzle and has created a lovely haze enveloping us as we ventured into the secret we were all giddy to partake. It felt like a tryst, looking at mountains surrounding you that are virtually untouched, like the lips of a lover everyone has yearned for but no one has claimed. It was, if anything, like being inside nature’s mouth, after all: the crevices, the perfect blending of the colors, the slightly crisp breeze, and the very green waters–all meant to lure you in and make you fall in love.

“This place has been preserved; a Nature Park.” Muku tells us in between effortlessly paddling the canoe. We pass by a few Chinese tourists whose eyes are straining from all the wonder. I have seen similar islands and mountains and green bright waters in my lifetime–luckily, Palawan has an abundance of them. But being inside these pockets somehow felt different. It felt…like a combination of being overwhelmed by something so grand, but natural and humble at the same time. 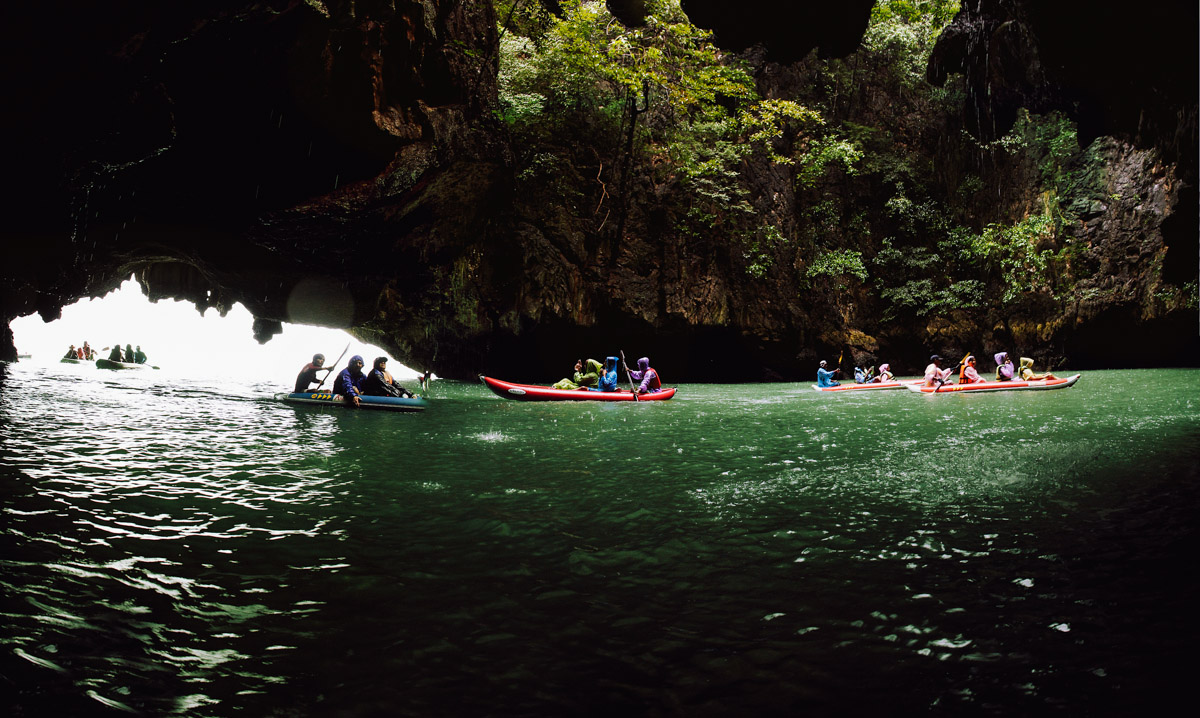 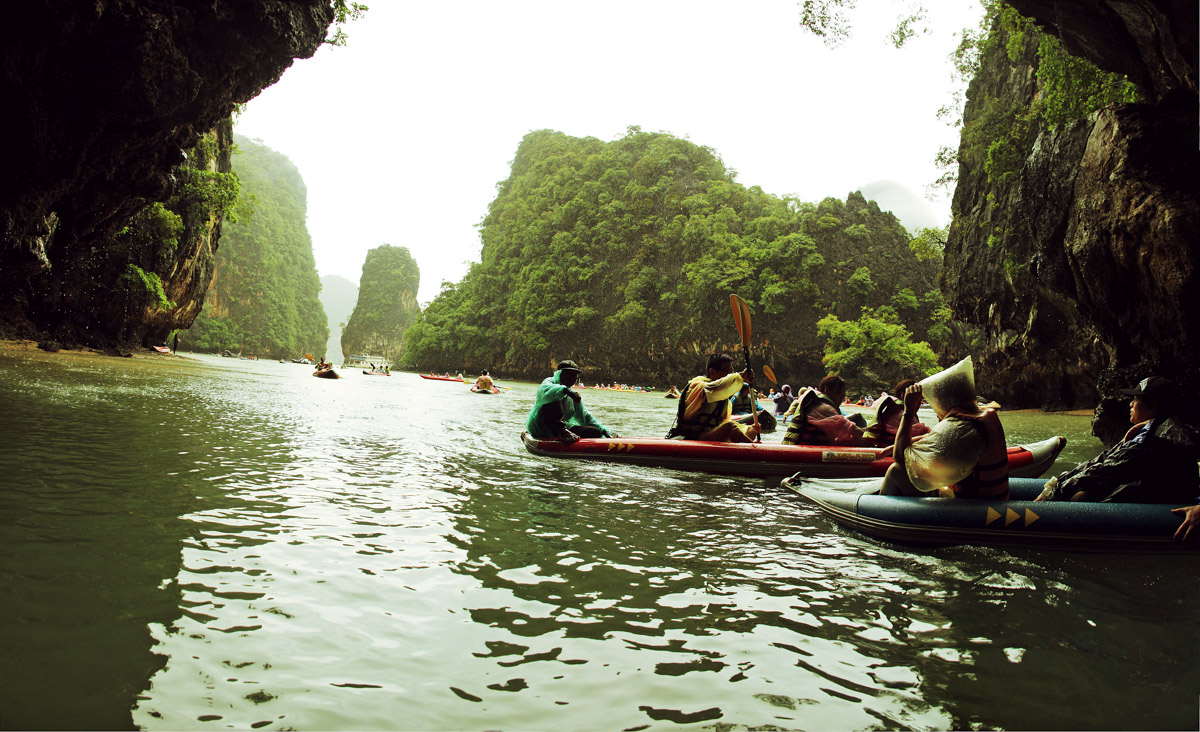 He must have seen my mouth hang open for some time.

“There are other very beautiful islands as well,” Muku offers. “Some with temples. We try hard to preserve what we have.”

I nod in agreement. I remember reading about a few festivals they have in Thailand about celebrating both the environment and paying respect to monks and the elderly. I imagine that they would try their hardest to preserve these areas which are closely tied to worship and to themselves.

I think I understand what the feeling is, now: perhaps it’s reverence.

I stare at an orange sign with blue ink for the illustration: an elementary drawing of a boat, with about 3 stick people flying away from it. The sign says: Slow slow slow your boat. The rest of the lyrics automatically popped in my head.

Just below it, a blue sign with white ink for letters: Evacuation route. A big arrow just beside it, pointing towards the other side of the island.

I shrug off the feeling—the sort of sad and a bit morbid humor of whomever decided to put both signs in one pole. You’ll see a lot more of those around the island Phuket and in Phi Phi, and sometimes you wonder if it’s appropriate to cluster jokes like that together, to be honest.

But the truth is, there are no other ways to avoid it–Phuket will never cease to be the paradise that got wiped by a tsunami. There will always be reminders everywhere as there’s no escaping the past, and yes it may happen again–but in the end, the people of Phuket learned to move on. Like all the disasters in our lives, we try to weave through what can be salvaged, equip ourselves should it happen again, and humbly try to preserve any beauty that’s left. And for Phuket: where they put signs for evacuation routes, they also sell trinkets. Life goes on. 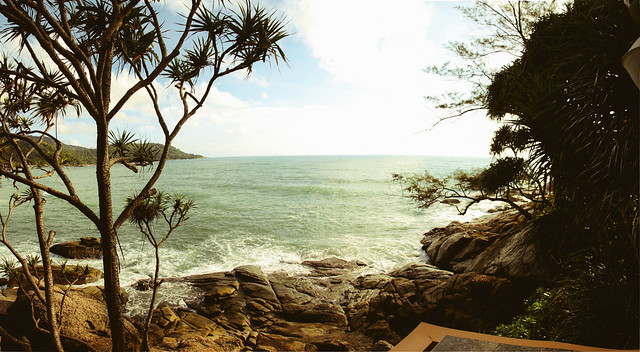 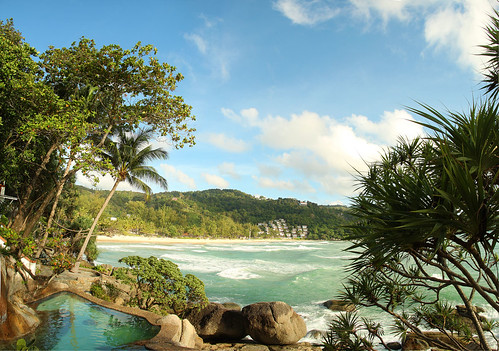 I suppose that’s prevalent with a lot of us within that South East Asian cluster that are tagged to be offering warm smiles: behind those warm smiles, you see a lot of the hardships and strength as well, perhaps a lot more positivity even after faced with such trauma. Perhaps that’s why I found Thailand to have the comfort of home: because this kind of beauty is what I’m used to.

So I suppose, Phuket’s charm, despite its obvious beauty and modest nature, is still a little hard to take in unguardedly—maybe because this time, I know Phuket is not just about the attraction, but the damage, the struggle, and the strength embedded in its charm. And for that, perhaps you need reverence.